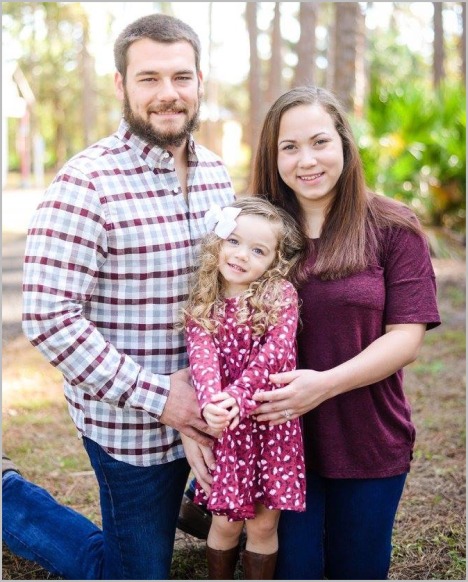 (Orange, CA, May 10, 2016) – Budget Blinds®, the largest window coverings franchise in North America with over 1,000 territories, recently participated in another episode of Designing Spaces’ Military Makeover to surprise an injured veteran who is still recovering from wounds he received while on tour in Afghanistan, his wife and their young daughter, with a newly remodeled home.

The show’s producers work hard to find deserving military veterans in need of home renovations as a way of saying “thank you” to our nation’s heroes.  Lance Corporal Devin Kyle is among them. Trained as a 0351 Assaultman, Kyle was on the ANA side of their Forward Operating Base on September 14, 2013, with another Marine, when an enemy sniper shot him in the thigh, a very severe, life-threatening wound. After being immediately evacuated, Kyle underwent his first surgery that night, and within another week, he had undergone another five. On his birthday, September 22, he arrived back in the states where he was greeted by his wife, Joanna, and their then 10-month-old daughter, Raelynne. He underwent another four surgeries, including an Integra placement and a skin graft. For his service and injuries, Kyle was awarded the Purple Heart, Combat Action Ribbon, Afghanistan Campaign Medal, National Defense Medal, Global War on Terrorism Medal, Naval Sea Service Ribbon and a NATO-ISAF Medal.

In just four short days, a crew of 70 workers and volunteers completely transformed the Kyles’ home from the inside out, including a new bedroom, kitchen and living room, and plenty of surprises for their now three-year-old daughter. To see the outcome and the family’s reactions, watch the three-part series of Designing Spaces’ Military Makeover on Thursdays, beginning on May 12 at 7:00 a.m. (ET/PT) on Lifetime® Television.

For the renovation, Military Makeover teamed up with several valuable partners including Budget Blinds and their valued manufacturing partners, Custom Brands Group, who provided the stylish, child-safe roller shades throughout the house, and Draper, who provided a must-see, child-safe window covering in little Raelynne’s room.

“We were thrilled to participate in Military Makeover for our second time,” said Tracy Christman, Vice President of Vendor Alliance at Budget Blinds, who also appears in an episode.  “Not only does Budget Blinds have a long-standing history and commitment to supporting our veterans, but also because one of Budget Blinds’ goals is to help educate consumers on products, options, and features to keep homes with children safe, while still enjoying beautiful window coverings.”

Chief Executive Officer of Budget Blinds and its parent company, Home Franchise Concepts, Shirin Behzadi, also added, “At Budget Blinds, we share a strong commitment to supporting veterans who have served our country. Many of our franchisees across the country are veterans or have personal connections to the U.S. Armed Forces, so we feel extremely fortunate to have the opportunity to give back to these true American heroes when and where we can.”

Budget Blinds offers Veteran programs that heavily discount franchise fees, and recently received the Best for Vets: Franchise 2016 ranking by the Military Times. They have also received accolades or recognition for their Veteran programs from VetFran and Franchise Business Review™, as well as other prestigious franchise networks including Entrepreneur®, Franchise 500™, Inc. 5000, Canadian Franchise Association® and Franchise Times®. To learn more about their Veteran business ownership opportunities, visit budget-blinds-franchise.com.

Budget Blinds will be featured in two episodes of this three-part series scheduled to air on Thursdays, May 12, May 26, and June 9 on Lifetime® Television at 7:00 a.m. (ET/PT). Check your local listings.
About Military Makeover®
From the producers of the award-winning home decorating and remodeling show, Designing Spaces®, comes a very special mini-series dedicated to giving back to members of our Military and their loved ones. Enlisting the help of decorators, designers, landscapers and other home renovation experts, the host, retired United States Marine Corps Staff Sergeant R. Lee Ermey, “The Gunny,” helps transform the homes – and the lives – of military families across the country. The series airs at 7:00 a.m. (ET/PT) on Lifetime®. http://www.militarymakeover.tv/

Budget Blinds was founded in 1992 and is part of a family of brands under the umbrella of Home Franchise Concepts®, franchisor of home improvement service companies including Tailored Living® and Concrete Craft™.  Budget Blinds currently boasts more than 1,000 franchise territories throughout the United States, Canada and in Monterrey, Mexico. The company offers a full line of quality window coverings including shutters, shades, blinds, draperies and window film. It also provides free in-home consultations as well as complete measuring and installation services. Budget Blinds has been recognized as a leader in the franchise industry by organizations such as Entrepreneur, AllBusiness, Inc. and Franchise Business Review. For more information on Budget Blinds, visit www.budgetblinds.com or connect with us on Facebook at www.facebook.com/budgetblinds. For franchise opportunities, please visit www.budget-blinds-franchise.com.